Hearts and Minds is a UK charity that aims to raise the quality of life for individuals and their families affected by autism, by ensuring the provision of the highest standards in education, care and support.  Set up in 2010, it is currently campaigning to raise £1 million, to fund an Autism Centre of Excellence in Manchester.  Funds are raised through sporting challenges, and through a recycling scheme that swaps old mobile phones for iPads and new technology.  Many of the families who have registered for this scheme have children with autism and are hoping that an iPad will help their development.

Many of them are also involved in the Hearts and Minds community Facebook page, and this is their contribution to the 2013 Autism Positivity project:

My child with autism is awesome because...

...because she shines in her own way, she is a star!

...my son is blind and autistic he is awesome because he has such a lovely personality he is my world my everything puts a smile on my face everyday xx

...he's my son and makes me smile every day

...there's no one like him! He's special in every way xx

...he never fails to amaze me

...she lights up our life with her dancing and singing xx

...he has the kindest, purest heart X

...he is amazing and has the biggest smile ever!!! Xx

...he says what he thinks, and he thinks what he says

...he's my life and I don't no what I'd do without him he makes me smile everyday

...he never will be a follower, he has his own mind & his beautiful view of the world that many people could learn from. He is my bright light on a gloomy day. Always seeing good in everything & everyone. Shame more people aren't like him x

...he is super kind and always happy

...he LOVES how he is and so do we. He is a GREAT example in self awareness to my other 3 non-aspie children!

...because he continues to amaze me day in and day out. ❤

...he knows everything about buses and has taught me so much about love, compassion, patience and forgiveness. He is amazing.

And here are some of the children who have received iPads and other technology gifts from Hearts and Minds: 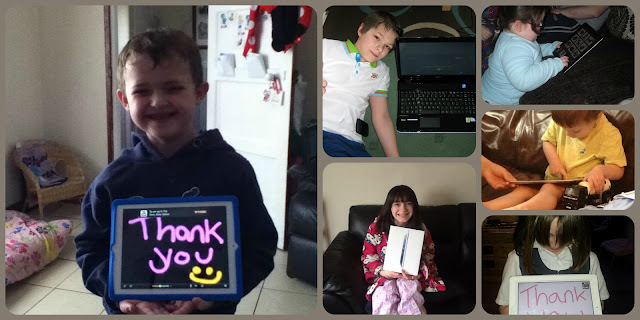 Could an iPad help your child too?

If you live in Britain, simply collect 165 old mobile phones and the Manchester-based charity Hearts and Minds will exchange them for a new iPad.

About Hearts and Minds

HeartsAndMindsUK
Hearts And Minds raises funds and provide services to support families living with autism. Runs a mobile phone recycling scheme that enables any family to get an iPad for their child in exchange for 165 old phones.